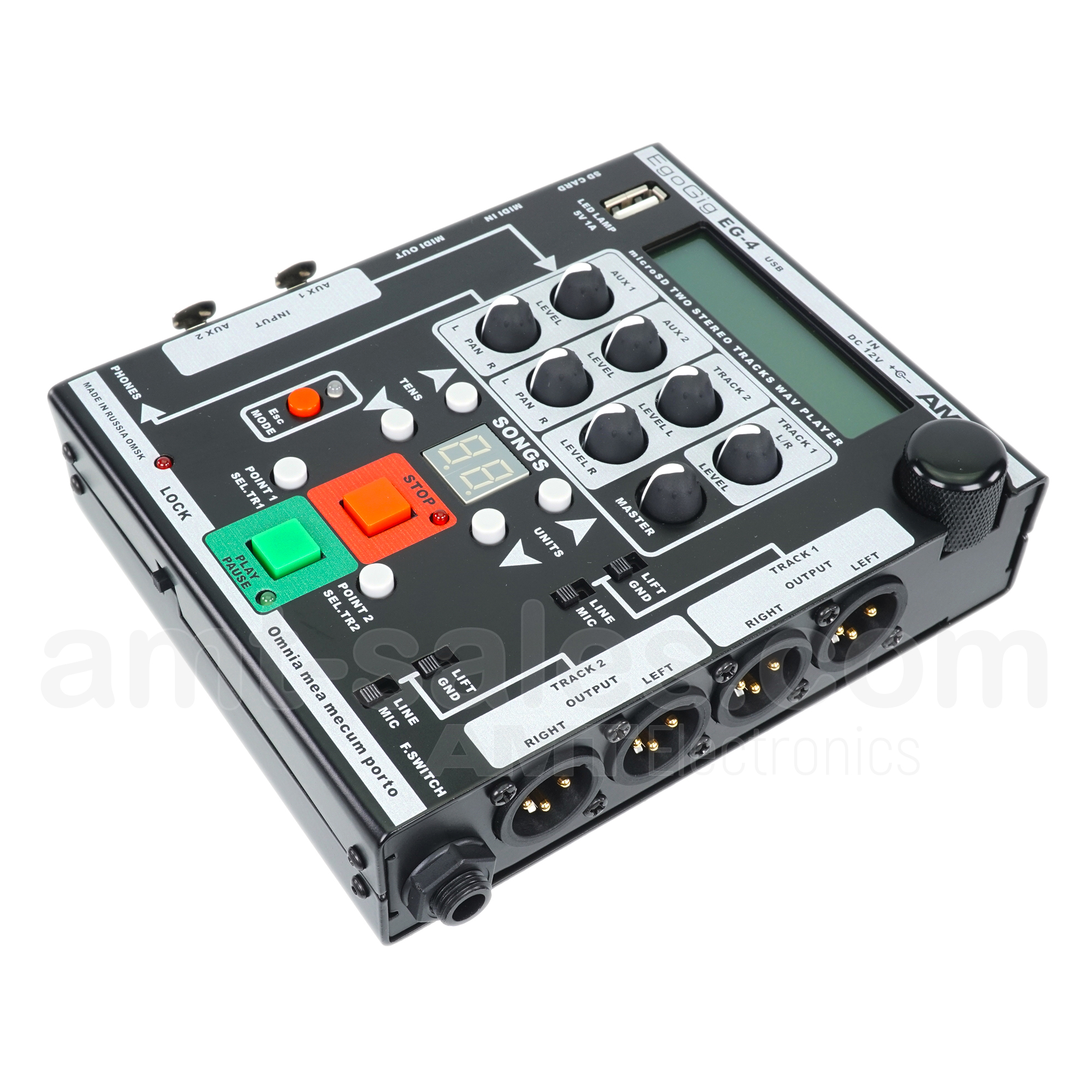 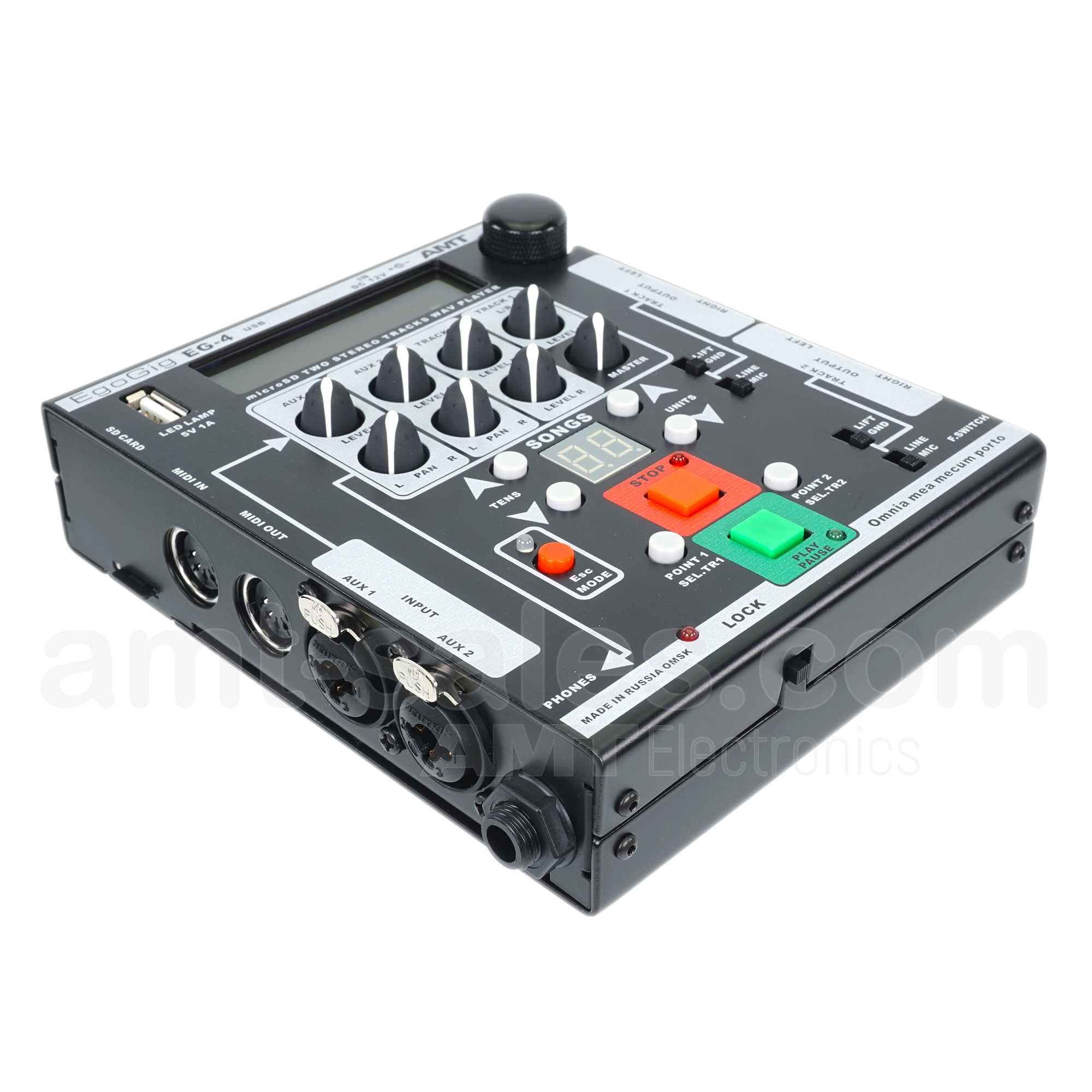 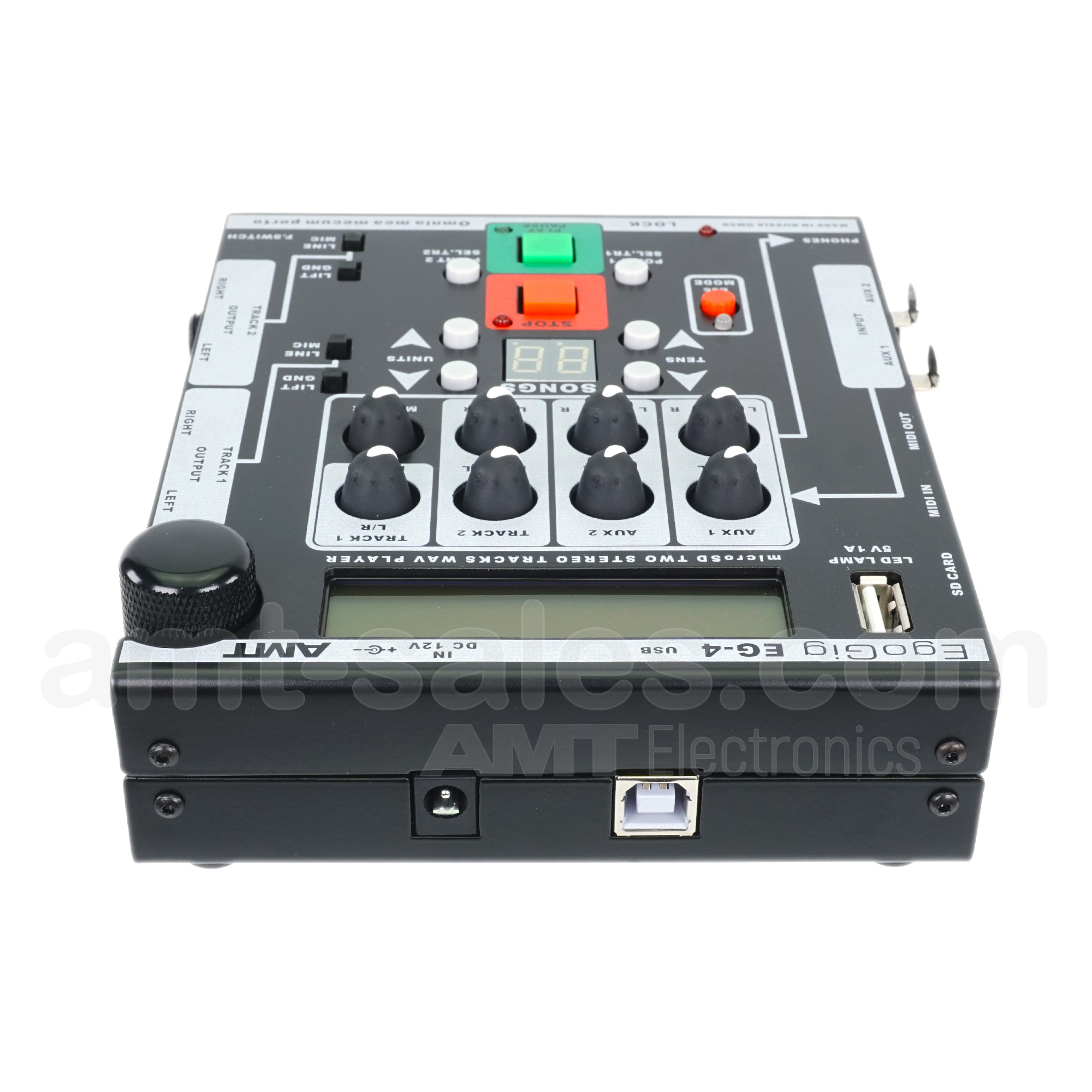 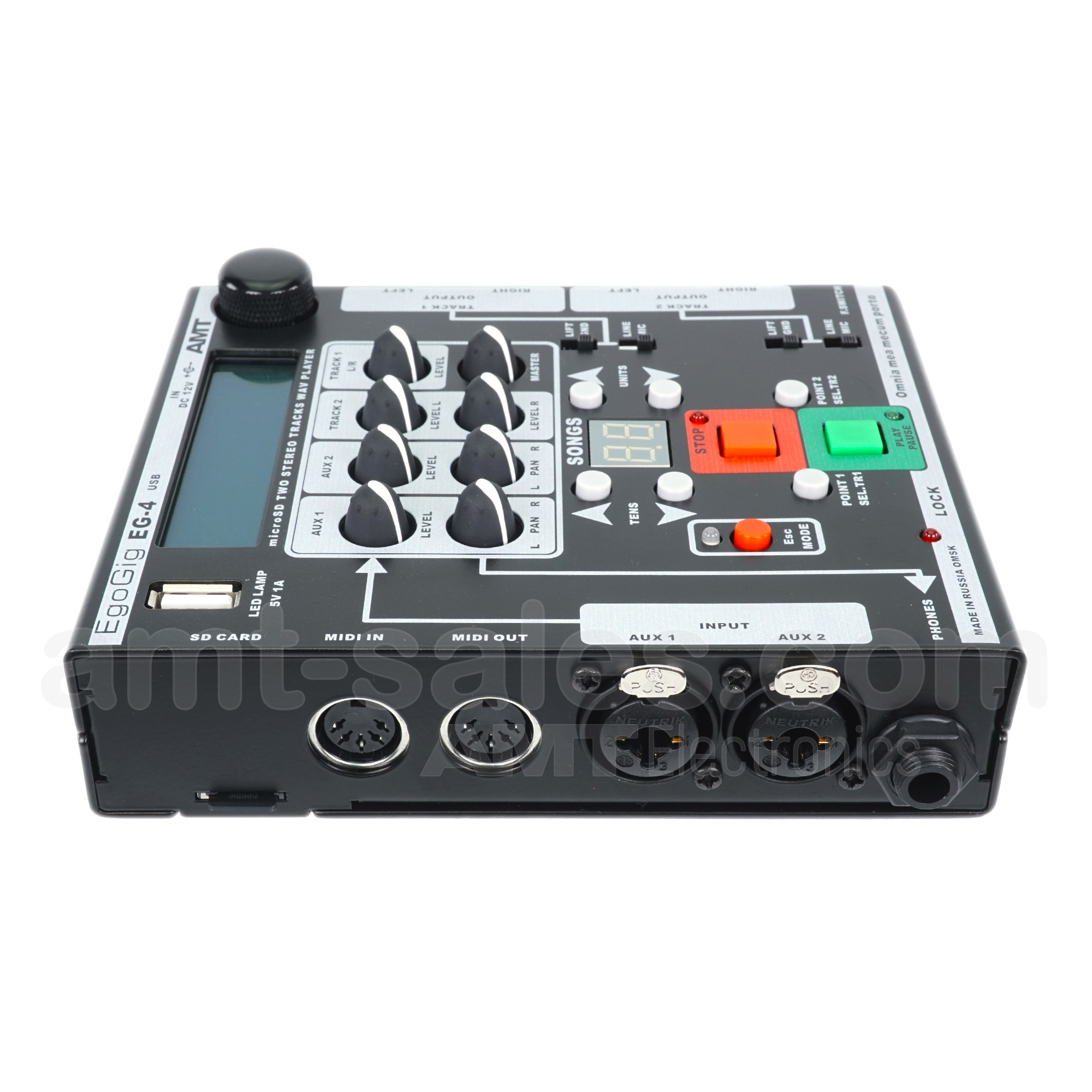 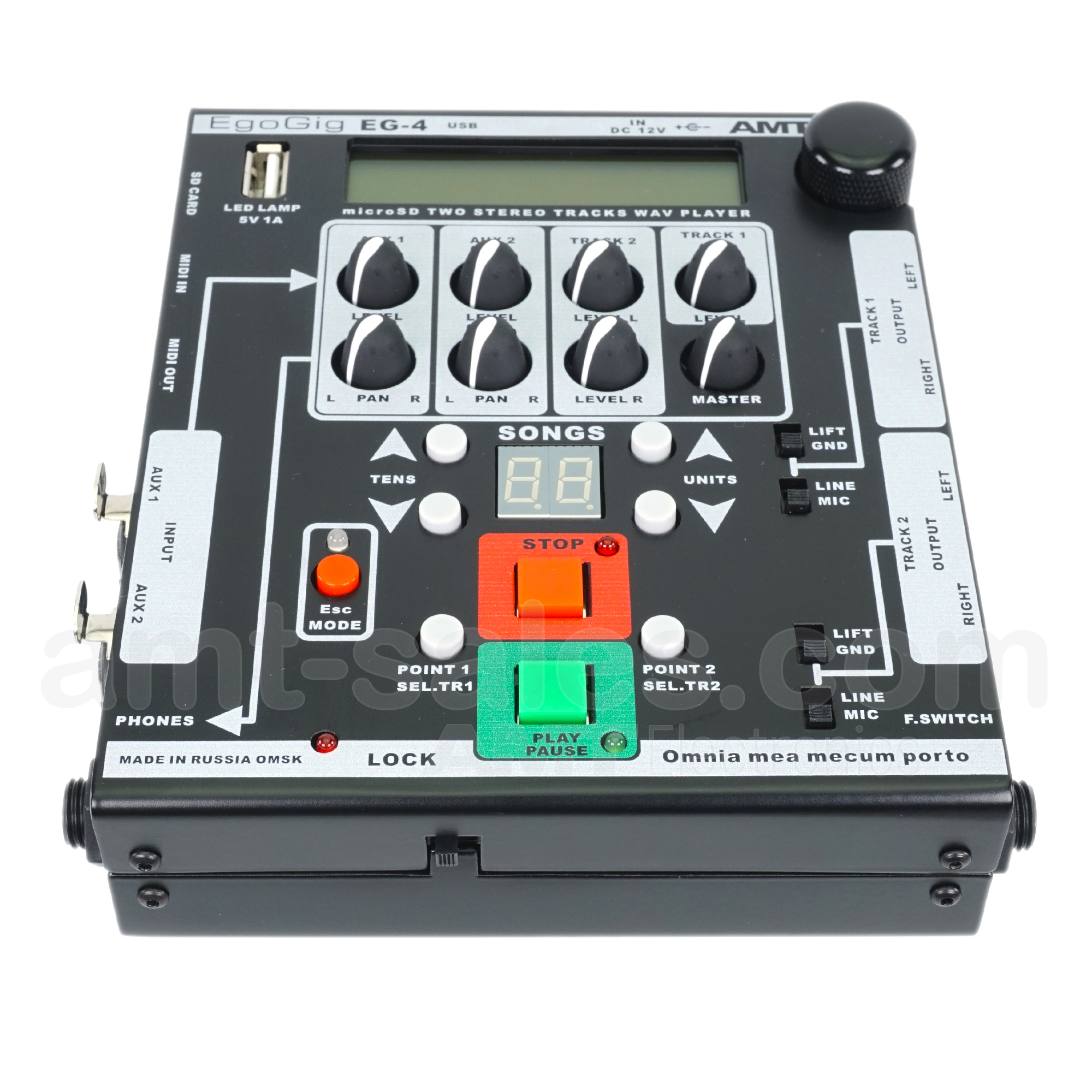 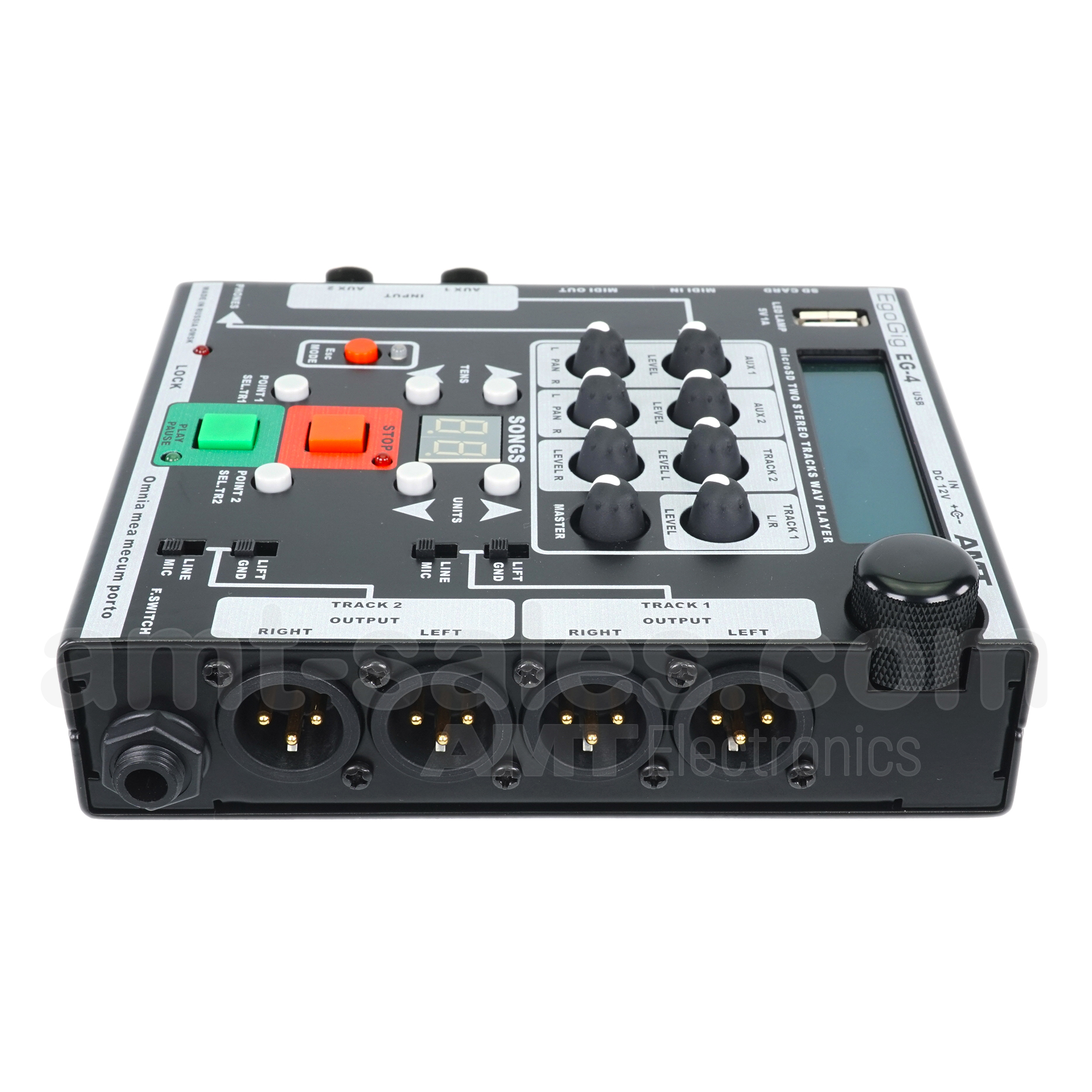 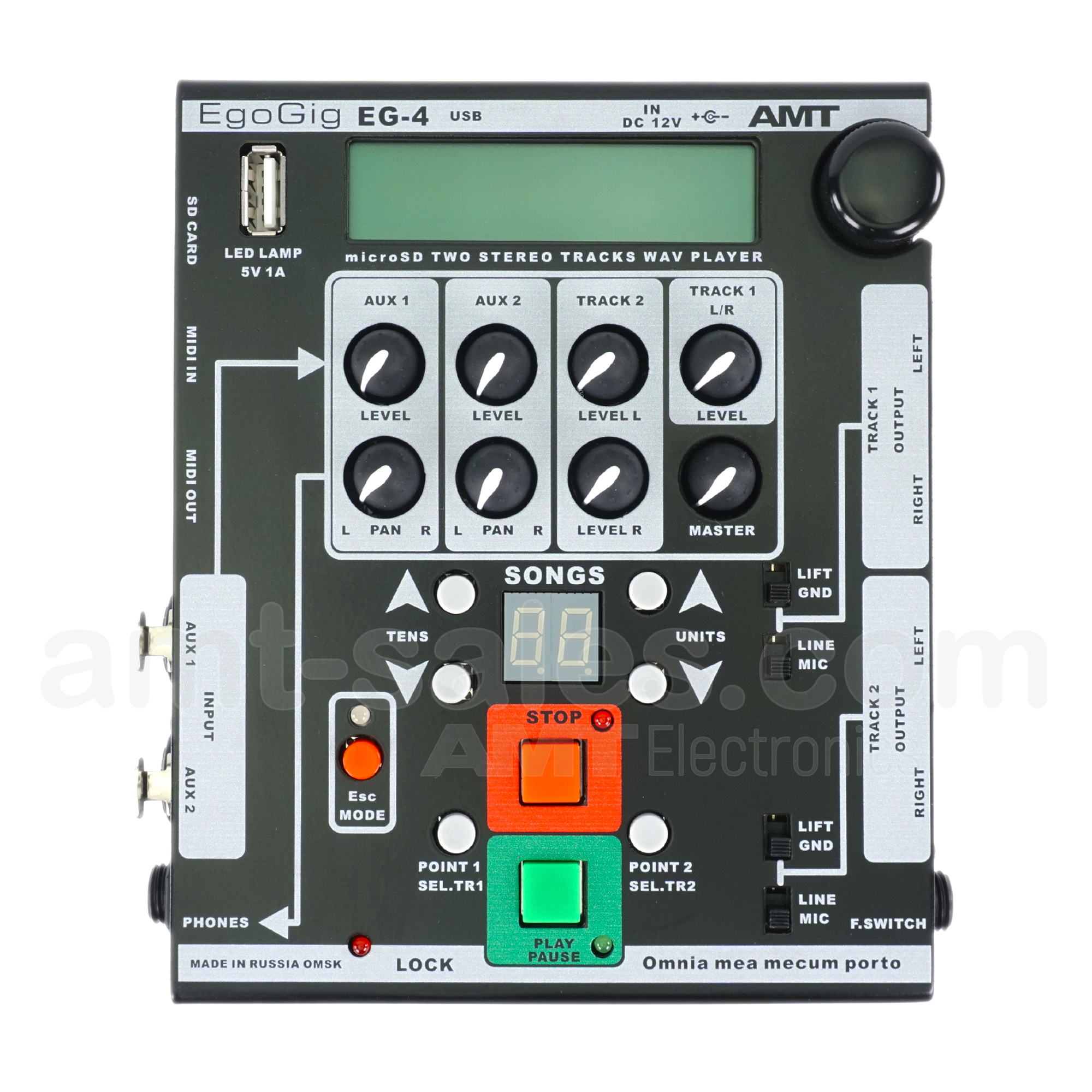 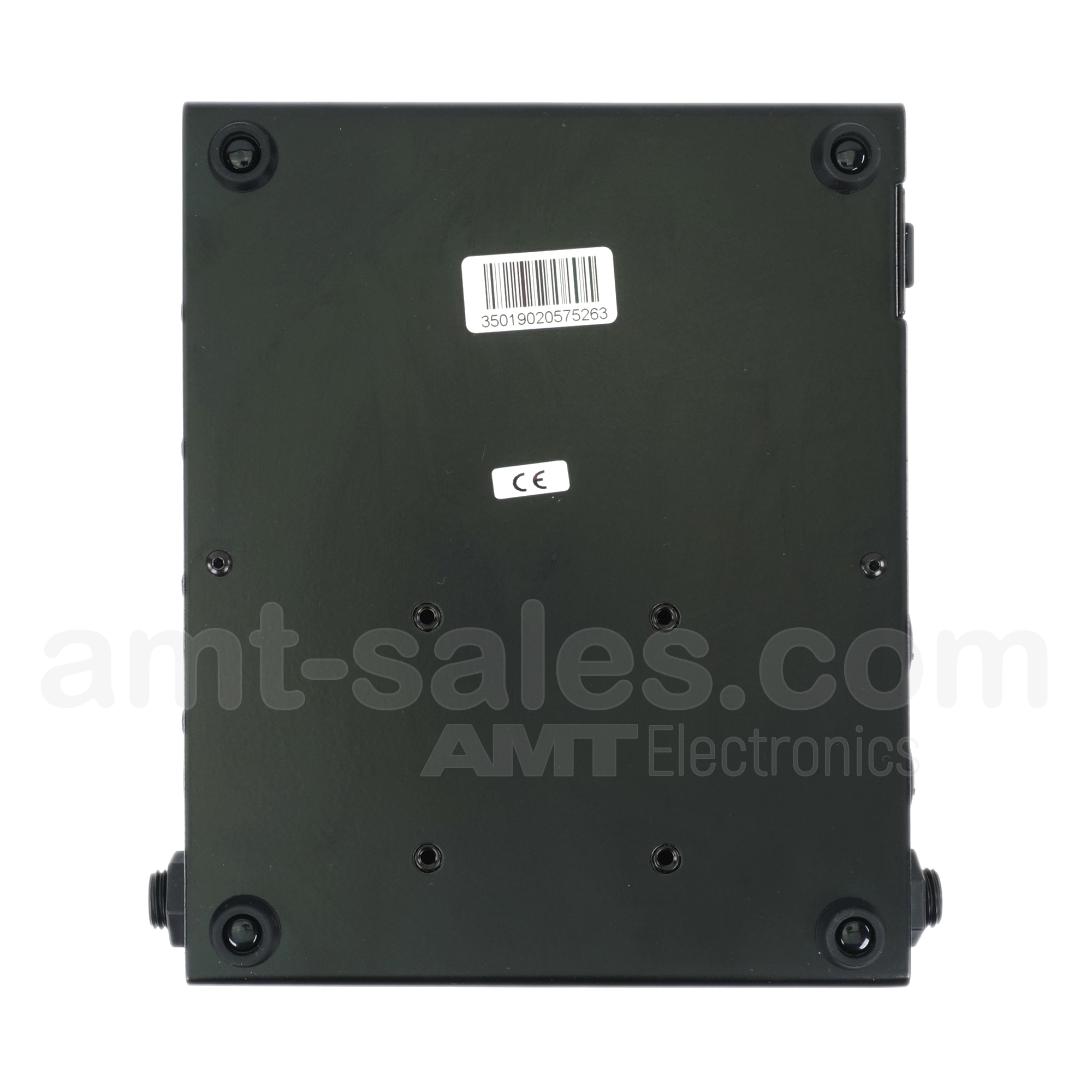 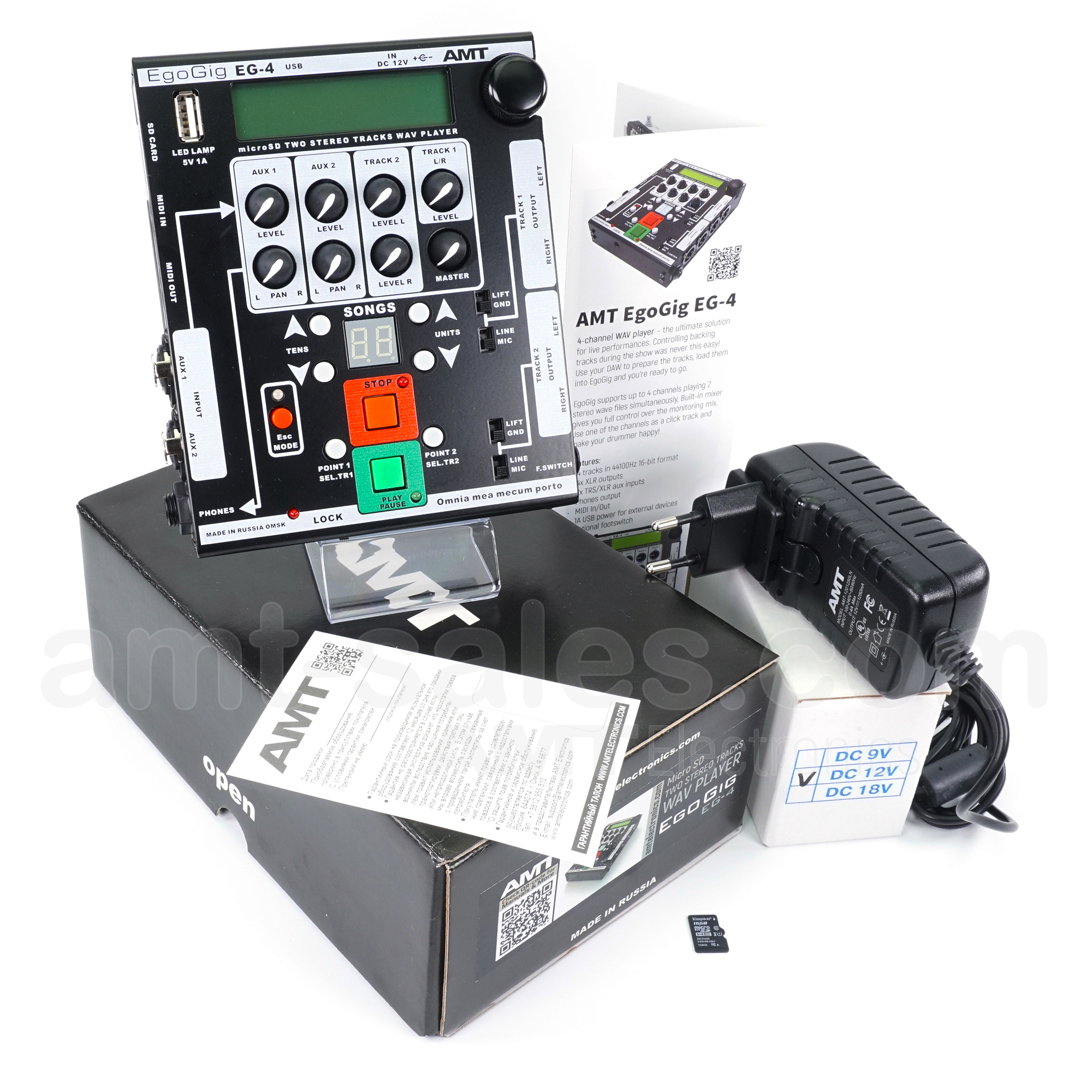 The warehouse of our official AMT European E-store https://amt-sales.com/ will be on VACATION TIME since June 27 till July 15, 2022.

During this period we will process orders as always 24 hours per day, but please just keep in mind the shipping of that orders will begin after July 15, 2022.

Thanks a lot for your kindly understanding!

An extra US/UK plugs for the power supply are purchased separately (you can choose):

An announcement of AMT EgoGig EG-4

This is a 4-channel WAV & MIDI player developed by the AMT’s engineers for playing an audio material which is pre-prepared in a DAW-sequencer (Cubase, Logic Pro, Reaper, Sonar, Studio One, etc) and synchronized by the timing. This audio material is pre-exported to one/two WAV stereo files (16bit / 44.1 kHz) and written to a memory card (microSD) from which the EgoGig EG-4 reads the final audio tracks (“playback tracks”).

AMT EgoGig EG-4 – perhaps is the first device on the world market which will be equally useful both for solo musicians and for the classical music band working “with the click” / “playback tracks”.

AMT’s developers took care that the device can be conveniently controlled not only in the traditional way (with your fingers) but also without touching the WAV player, that is, remotely. For that purpose, EgoGig has a special input “F. SWITCH” (TRS 6.35 mm “stereo Jack”) using for the standard two-button footswitch that can make life much easier for the drummer – or, let’s say if before the show you have to start playback some kind of “Intro” remotely from behind the scene.

The EgoGig also has a midi interface with the ability to accept external MIDI commands which allows you to connect the device easily, for example, to the MIDI controller of your Pedalboard and from there to control the playback of tracks on the player (pause/stop, playback, pre/post track) by simple touching of your foot. It’s perfect for solo guitarists (or any other musicians working alone) because in this case, you can easily place your EgoGig directly in the pedalboard among other guitar pedals, and thus will not need to tilt over the WAV player!

This player is equally focused on the concert “live” work, and on solving problems related to the convenience of learning the audio material at home/rehearsal: among other things, the device has the function of looping playback of the selected fragment of the track.

Being inside of the band which working “with the click”, AMT EgoGig EG-4 will certainly remain there as a “permanent member”, because its functionality is designed to replace a long-known cumbersome and unstable “classical” connecting scheme: “PC/MAC >> multi-channel external sound card >>  drummer’s mixer + tons of cables.”

Why is AMT EgoGig EG-4 your choice?

First, EgoGig is a multichannel WAV player (so you get rid of the unstable connecting system such as “PC/MAC + multi-channel sound card”).

Three independent channels you can easily direct to the mixer console of the sound engineer (for example, 1-2 channels are keyboard stereo tracks, the third channel – backing vocal mono track), in this case, the fourth channel can be the “click” for the drummer.

Second, EgoGig is a complete individual mixer to control your personal monitoring  (especially for drummers).On the top panel of the player, there are independent volume control knobs for each of all 4 channels of “playback”.

There are also available two inputs AUX 1 and AUX 2 which allow you to receive from the concert sound engineer “your” personal monitor line, the total volume level of which can also adjust independently by the drummer, building in a few seconds comfortable mix in their headphones in real time!

Third, the EgoGig is the result of close cooperation with real musicians, the AMT Artists living in different parts of the world and touring all over the world. So we tried to make our device as much as possible thought-out, easy to use, compact, reliable and functional.

For example, taking in mind that there is often a complete darkness on a stage during the show, we placed a standard 5 Volt USB output connector  (current is up to 1A) on the top of the player, it is enough to power any USB LED flashlight on a flexible stem, or to charge any modern smartphone/tablet.

We were careful with the overall ergonomics of the device.

For convenience, speed and ease of navigation through the menu of our Player, as well as to manage all the parameters of the Egogig, we have provided an Encoder control knob, well known to the owners of our Pangea’s devices (CP-100FX, CP-100FX-S series). This knob lets you easily browse the device menus, to choose and edit playlists and execute other control functions. The liquid crystal display shows some basic information about the operation of the device, as well as helps to navigate the trees of files and folders of the memory card (MicroSD).

The logic of working with WAV files played by the player does not require any additional software to be installed on your PC/MAC. All you need to do is to export correctly the necessary tracks from the DAW sequencer you are using, rename the resulting WAV files as needed and simply write them to the microSD memory card using a regular card reader for PC/MAC. After that, it is enough to insert this microSD into the EgoGig’s card slot – and the device is ready to work!

The decision to use for working with WAV files an external, but not the internal memory of the device, was also taken for a reason: in this case, you can always take a duplicate memory card with you!

And in case of sudden failure of microSD card (or problems with reading files) – in seconds you will be able to restore all your “set list” just by replacing the card in the player with the backup “duplicate”! To the same, for example, for different projects (in fact, drummers sometimes play in several bands simultaneously!) you can load different memory cards into the device according to the principle “for each team – its own microSD with readily done playlists and so on”. As you can see, every time you need to “upload some new tracks into the player” it is not necessary to connect the device itself to the computer  – this kind of connecting to your PC/MAC is only necessary to update the firmware of the device.

And, of course, realizing how the dimensions and weight of the devices are important for regular touring musicians (especially when we are talking about air travel), we have made our AMT EgoGig EG-4 a very compact device for its functionality. At the same time, a reliable metal case, as well as prudently slightly recessed volume knobs inside the case will not make you worry about the safety of your new AMT WAV player at the moment of check-in your Luggage at the airport, waiting for the next long-distance flight “Moscow – New York” within the framework of a big tour of your amazing rock band!

The format of audio files to be downloaded to SD card:

All Firmware, Application and other necessary information are available on AMT’s Media Center:

User’s Guide for the device is here >> 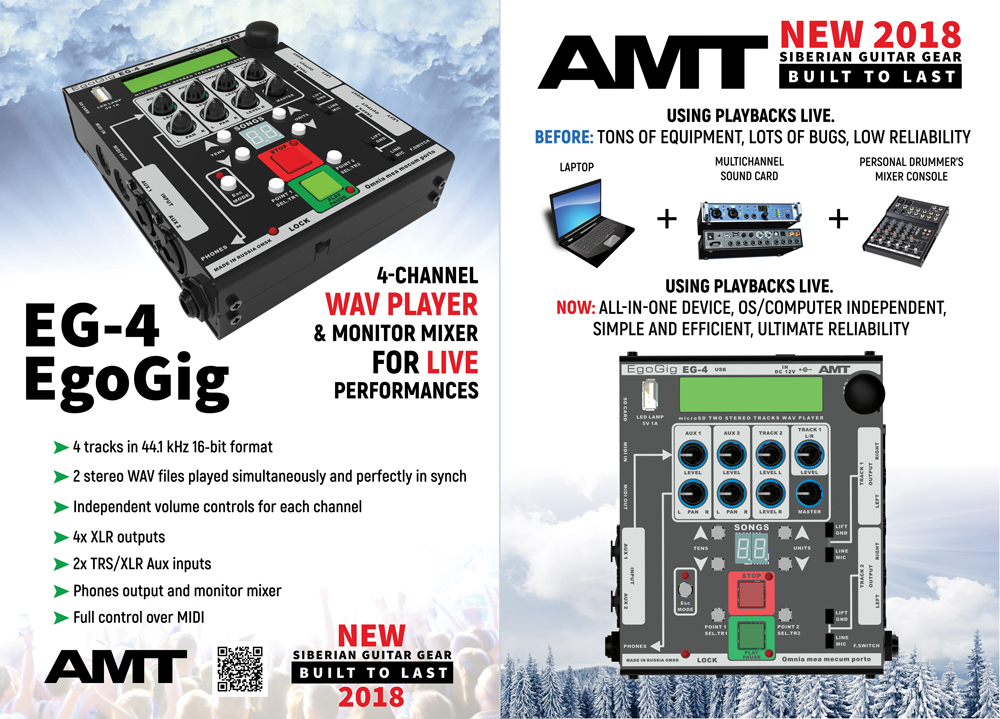 For the last 10 years in this industry I've been pitching EXACTLY this device to Tascam, Cymatic or SMProAudio.
And you (seem to have) nailed it! Awesome!